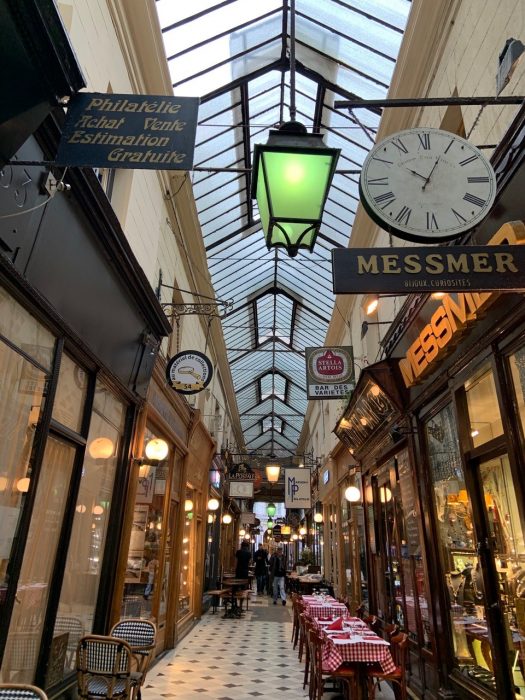 Do not miss a walk through these famous “passages” located very close to the apartments:

Since it was built in 1836, Passage Jouffroy has been one of the most visited covered arcades in the capital. Situated on the Grands Boulevards and in the continuation of Passage des Panoramas, it owes its charm to its beautiful iron and glass architecture (the ogive glass roof immediately catches the eye) and its marble paving, renovated in 1987. The other asset to the Passage Jouffroy is the variety and originality of the establishments which it houses. Children and adults enjoy the Musée Grévin and its famous waxwork models. The Salon des Miroirs is a former 19th century brasserie which, today, is only used for private hire and transforms into a club on Saturday nights. Some of the most original shops add a special touch to the visit: old canes and walking sticks, old books, paper specialists and many others. It’s worth a visit for the window displays alone! Gourmets can take a break at Valentin, the unmissable tearoom. It is also accessible via 9 Rue de la Grange-Batelière.

Real tribute to strollers and curious walkers, the Passage des Panoramas is considered the first covered walkway in Paris. Built in 1799, it has retained its old-fashioned charm and merchant spirit. Each store window reflects an historical moment of the French capital; from the Bourse district to the Grands Boulevards, sheltered by a magnificent canopy, the ‘commercial artery’ is listed as historical monument. Along its 133 metres of intense activity, eateries share the space with craftsmen. They work alongside many postcards, coins, autographs and old stamps collectors. Admire the ancient architecture still present, such as those of the Chocolatier Marquis and Stern printing house, symbolising the ambitious planning from the 18th century. Inaugurated in 1807, the Théâtre des Variétés is still active; programming concerts and comedies, it enlivens the walkway for two centuries, with celebrities always present.

The entrances are located 4, rue des Petits-Champs ; 5-7, rue de la Banque ; 6, rue Vivienne. Built in 1832, it has retained its old-fashioned charm and merchant spirit. Since the 1980’s Galerie Vivienne became very fashionable again thanks to Jean-Paul Gaultier. It has nice shops and is very close by to another passage the Galerie Colbert.